THE ABDICATION: AN ERO(T)ICOMIC EPIC

Spring 2032: an enigmatic bandleader named Triboulet arrives by helicopter in Rome, where his carnivalesque troupe awaits with a legion of animals and unruly kids. When provoking states of joyous panic through their ritualistic frenzies, the troupe’s arrival proves restorative, for the world is beset with famines, plagues, and religious conflicts, which Triboulet seeks to neutralize with freeing laughter. As he and his troupe begin constructing strange edifices in the Eternal City, sacred sites around the world suffer terrible, often beguiling forms of vandalism, and rumors abound that the Christ has actually finally returned. 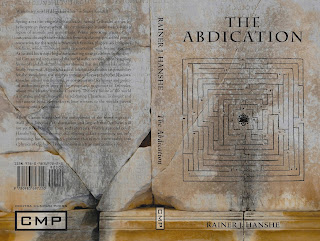 Although radical Islamic sects claim responsibility for the vandalism, the culprits remain unknown: is it the Jihadists, anarcho-atheist intellectuals, or eco-terrorists? Religious and political authorities grow leery of the troupe and suspicious of Triboulet, whose true identity remains a mystery. The very future of the world is at stake, and while touring Israel during Christmas, Triboulet and his raucous band of pranksters bear witness to the world’s pivotal crossing into a new reality.
Albert Camus noted that ‘the metaphysics of the worst’ expresses itself in a literature of damnation and argued that ‘we have still not yet found the exit’ from such literature. With his second novel, Hanshe has found the way out, offering in fact something not only promising, but astounding, a pathway that is into a new reality, into a ‘physics of the best.’ The Abdication is a true ero(t)icomic epic.


http://martianwalrus.com/drupal/
*
Posted by Rainer at 10:43 AM No comments:

"With this new novel, Hanshe reinforces his growing reputation as one of today's most original and thought-provoking novelists."—Keith Ansell-Pearson

“The Abdication is an extraordinary mythic delirium-philosophy, rich with erudition and wit, chronicling the exploits of a Heraclitean prophet ushering in nothing less than the Age of Heterology.  Long may it unnerve.”—Lance Olsen, author of Calendar of Regrets

“Hanshe's phantasmagoric and cunning prose eviscerates accreted mythologies while revealing the tragedy attendant on the death and births of gods. Its controversial premises will enrage and provoke many, but the quality and elegance of the writing will amaze all."—Nicholas Birns, Theory After Theory


“The Abdication is a visionary novel of dangerous ideas, a theological thriller concerned with the absence of god and the question posed by the phrase: Dionysus versus the Crucified. It is as richly allusive as it is physically direct: a novel of revolt that can at times be revolting in its relentless push to break the mold of idealist thought. As well argued as it is intricately arcane, indeed dense with learning and lore, this book is both experimental and assured, a comedy of high seriousness and gospel of the flesh that our winded civilization has needed for 2,000 years. Ridendo dicere severum!”—Stuart Kendall, author of Georges Bataille

Posted by Rainer at 8:04 PM No comments:

The Acolytes. A review by Markku Nivalainen. Maailmankirjat. November 2011. Finnish.

Posted by Rainer at 7:19 AM No comments:

“Hanshe performs in Acolytes an aristocratic and "untimely" à rebours in fundamental mythic and primordial rapport with the Other and the Shadow . . . challenging the readers (and critics) supinely simplifying and conformist habits so-called “average” or mass, dispensers of facile and submissive consensus of the laws of the socio-intellectual market; so the oracular emphasis of his novel is that of a real youth "manifesto", crossed by the slogans "sublime" and Dionysian, and profoundly tied to a religio classico-romantic artistic creation that is poured out in abundance of poetical citation.”—Maura Del Serra


*
"The Acolytes flies in the face of mainstream publishing with its eye on something bigger and vaster than the conventional marketplace. In mode its allegorical approach is so different than the types of Jonathan Franzen 'family sagas' that publishers pick up on nowadays. It’s quirky, weird, and mannered and many of the scenes have the strange power of dreams. They proceed according to their own logic, stately as yachts, moving irrevocably, like Time. Like John Cowper Powys, Hanshe has the talent for making other species come to life."—Kevin Killian

"It is delightful to read a novel of such intelligence that is nonetheless literary, in other words that does not resort to extra-literary discourses such as history or philosophy to glean its intelligence. The grave inscription motif, as well as the stylistic combination of the extravagant and the elemental is very Thomas Hardyesque. The sex scenes, in different keys, are phantasmagoric and have sensuality in both light and dark avatars. There is an essential mysteriousness at the heart of the strange set of relationships in the book and the complex power relation between Amos and Ivan is unusual and compellingly dramatized. It is a fine work, really a substantive achievement. This is a pathbreaking novel.”—Nicholas Birns


*
“Hanshe’s Aristophanic critique of Amos Latimer and his acolytes and two different modes of discipleship articulates something that can be seen in many other regions of life and society: Plato and Aristotle, Leo Strauss and Arendt, Malcom X and the Nation, and the cult of fame. The fascinating thing, and part of the reason why his account is archetypical in a profound and broadly historically applicable manner, is that the contrast between sharing in speech shamelessly and not sharing is what differentiates the two modes of aesthetics in classical antiquity: the misanthropic and the philanthropic. The Acolytes is a brave work that says something of extraordinary importance for our understanding of political culture and culture more generally. Hanshe faces the issue of sex ontologically in a way that other American writers do not. He joins Burroughs in critically addressing the depths of the question of sexuality and control and brings the parallel that Burroughs wrote about in colonialism and militarism and the CIA to the left wing, avant-garde. A moving and impressive book.”—Rachael Sotos, New School University

Join us in celebrating the publication of Rainer J. Hanshe's The Acolytes and several other new books published by EyeCorner Press, including novels, poetry, plays, and more.

Authors Hanshe, Sorensen, Gibbons, and DiDonna will perform from their texts. Dashing editor-in-chief Camelia Elias will be flying in from Europe, and she'll be performing too. Hell, she might even play the drums, but they won't be bongos . . .

Happy Hour: half off all beers and well drinks! 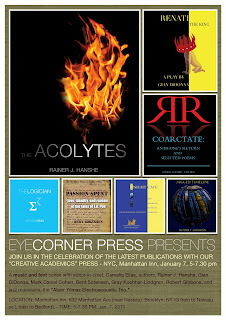 ﻿
EyeCorner Press is a daring and eclectic independent publisher based in Roskilde, Denmark that publishes work in English, Danish, Romanian, and bilingual editions. A host of other compelling works will soon be published by ECP including Yunus Tuncel's Towards a Genealogy of Spectacle, George Hunka's Word Made Flesh: Philosophy, Eros, and Contemporary Drama, David Kilpatrick's Writing with Blood: The Sacrificial Dramatist as Tragic Man, and more.